Ad blocker detected: Our website is made possible by displaying online advertisements to our visitors. Please consider supporting us by disabling your ad blocker on our website.


Legendary guitarist and record producer Bob Kulick has died at the age of 70. His passing was confirmed by his brother, former KISS guitarist Bruce Kulick.

Earlier today, Bruce posted the following message on social media: "I am heartbroken to have to share the news of the passing of my brother Bob Kulick. His love of music, and his talent as a musician and producer should always be celebrated. I know he is at peace now, with my parents, playing his guitar as loud as possible. Please respect the Kulick Family's privacy during this very sad time."

Throughout his 40-plus-year music career, Bob Kulick has worked with an astonishing array of artists: from Meat Loaf to MOTÖRHEAD; from KISS to Michael Bolton; W.A.S.P. to Diana Ross; as well as legends such as Roger Daltrey, Alice Cooper, Lou Reed and Paul Stanley's first solo LP and tour.

Bob began his musical profession at 16 — when most high schoolers are still trying to figure out where they're going in life — appearing on the 1966 album "Winchester Cathedral" from the RANDOM BLUES BAND, the "baby band" that Bob played in that played The Café Wha in New York's Greenwich Village alongside Jimmy James and the BLUE FLAMES (later rechristened Jimi Hendrix).

1973 saw Kulick make the connection that he has been associated the most with throughout his career. He auditioned for — and got passed over by — KISS. Instead of being dejected, the six-stringer aligned himself with the band over the years, playing on the studio material on "Kiss Alive II", providing solos on the "Killers" album, co-writing "Naked City" from "Unmasked" and guesting on Paul Stanley's 1979 solo album and tour a decade later. He even suggested his brother to the band.

Last month, Bruce admitted in an interview that his relationship with Bob was "not healthy." Bruce spoke about his estranged older brother five months after Bob made a public post on his personal Facebook page as as well as on his Instagram accusing Bruce of contributory "copyright infringement" over the sale of "Kulick Brothers" merchandise items, including a signed photo. According to Bob, the items were being made available via Kiss Army Merchandise with permission from Bruce only. Bob went on to say that Bruce "has a restraining order" against him, but didn't offer any more details about the circumstances that led to the order being issued.

During 2017's "Kiss Kruise VII", the Kulick brothers played a 13-song set that featured 10 rarely performed KISS songs such as "Turn On The Night" and "All American Man", as well as three classics from Paul Stanley's 1978 solo album (on which Bob performed). That same year, Bob released a solo album, "Skeletons In The Closet".

W.A.S.P. leader Blackie Lawless has paid tribute to Frankie Banali, who died Thursday night (August 20) at the age of 68.

Banali's history with QUIET RIOT spanned over 37 years and he had the distinction of being the only member of the band to have recorded on every single QUIET RIOT release from 1983's "Metal Health", which was the first heavy metal album to reach No. 1 on the Billboard chart, through 2019's "Hollywood Cowboys". He also recorded seven albums with W.A.S.P. between 1989 and 2004.

In a social media post on Friday (August 21), Lawless wrote: "Frankie Banali and the fight that he has endured with cancer for well over a year now, that has taken its toll physically, emotionally and spiritually is now finished. My friend is gone.

"I met him July 17th 1975. It was my first night in Hollywood. I was scared to death and had no idea of what waited for me in this 'Dream Factory' that promised so much, but at the same time had a reputation that proceeded itself of being astonishingly cruel to its naïve dreamers. He was outside leaning up against the wall at the Roxy on the Strip. Arthur Kane had met him on the last N.Y. DOLLS trip to L.A. and he introduced me to him. I remember thinking, 'I don't even care if this guy can play. This guy's an absolute Rock Star and nobody knows it yet'. I wanted to be in a band with him…BAD!

"Over the years, our lives crossed paths in many ways both personally and professionally, and I would go see the bands he was playing in, and he stuck out in all of them. His talent separated him from everyone else he was on stage with.

"One night in 1979 I ran into him at a burger joint and played him a demo of the songs I had just completed. We sat in my car and listened, and it was at that moment we started to really develop a friendship that would last us all of our lives. Those songs we listened to that night in my car would later become the foundation that both he and I would build from the ground up 11 years later. The record would be called 'The Crimson Idol'.

"Over the years, we got to know each other well. His love for music and its history would lead us into countless hours of romancing the music and the bands we idolized. One of the things that impressed me was how much detail he knew about other instruments. Little things that usually only players who use those instruments, Frankie could discuss with them, and it would always get those players attention that a drummer could have that kind of detailed knowledge. But he was not your average drummer. He'd prove that over and over again to all he touched with his musical greatness.

"Us being kids from New York, we naturally had a love for baseball. During the '89 Headless Tour on days off we'd go to every Major League Ball Park we could. One day we were in Cincinnati and the Reds were in town. We had a show that night, but we thought we could catch the first half of the game and then get down to the venue. Well, the game was getting really good, and we knew we were supposed to get going, or we'd be late for the show. We were sitting there talking, and he said: All those people are in the venue all excited and thinking, 'oh man, the Band is backstage getting ready to come out and it's gonna be insane!'. But there we were, sitting in a ball park watching the game, eating peanuts and laughing, and having a good ole time. Finally, we knew we were in trouble, so we got our butts up and made it to the show, and we were about a half hour late getting on stage. I'd turn around during the show and look up at him, and we'd both break out laughing, like a couple of little kids that were skipping school. It was one of those moments that only the two of you will ever know.

"We had some insanely fun times together and I will truly miss that. He could make me laugh more than almost anybody. He was one of those guys that was genuinely funny. Seriously, Frankie could make a dog laugh. I could go on and on but those stories will be mine and mine alone, and for that, I am selfishly unashamed.

"But we experienced heartache together as well. Years ago he and I sat alone in a room having the wake for his mother. I hurt so badly for him and I couldn't take the pain away from him. It's those kinds of moments that make you 'tight'.

"As Christians, we're told to 'not let the left hand know what the right hand is doing', meaning, whatever good works you do in this world, don't do it for the acknowledgment of men so the world will praise you. Over the years he supported many orphaned children in different countries and saw those children through to adulthood. From time to time he would show me pictures of these children… children he would never be able to meet. He never spoke publicly about it. That's who Frankie Banali was.

"I want to take a moment, to put into perspective, the contributions that this man has made to the Rock genre that we all now take for granted. Unashamedly called… Heavy Metal!

"For better or for worse, the entertainment industry attempts to emulate its own successes.

"Rarely will any Movie, Television or Record Company venture into uncharted territories for fear of failure. In 1983 when QUIET RIOT released the ground breaking Album 'Metal Health', the music business as we know it changed. There is no way I can over exaggerate this fact. That album gave birth to an entire movement, that later myself and many others would benefit from.

"'Metal Health' would go on to sell over an astounding 10 million copies in the U.S. and much more worldwide. This had never been done before by any so called 'Hard Rock' or 'Heavy Metal' band in the history of the music business. It blew the doors off all the conventional thinking of what a Rock band was capable of doing. Every Rock band, and I mean EVERY Rock band that came after QUIET RIOT owes a debt to them that can never be repaid. Without that band, the genre we know and love today simply would not exist in the way it does now. It created a domino effect that showed MTV, all record companies, live music promoters, booking agents and every other fledgling, up and coming Rock group that this music would not only not go away, but to the contrary, was becoming massive!

"For myself, there's no way I can exaggerate the importance of his talent on my career. Of the many, many records we made together, the thing that was the most memorable to me was watching him find a way to interpret my vision of the things I was hearing. As a musician he was far superior to myself and he knew it, but what made our collaboration work was his respect for the songs. Because it was only the two of us in the studio I would use him as the lead instrument. I would push him to carry the arrangements in a way that is usually reserved for only lead vocals or lead guitars. It was remarkable to watch his mind work. I'd throw idea's at him and then watch him run them through this extraordinary drumming filter.

"It is impossible to sum up the totality of a man's life in only a few words. The only thing we really have in this world is what we leave behind. It was the great educator Horace Mann that said: 'Be ashamed to die until you have won some victory for humanity'. Frankie Banali has nothing to be ashamed for. He was a huge part of that band that won that victory for the music we all love.

"My friend is gone.

"But in every heart there's a Truth that beats.

"He was a believer in the Lord Jesus Christ. So I have the assurance that I will see him again one day.

"A few days ago the last thing I wrote to him was: 'A while back, you and I did a song called 'Hold On To My Heart', … hold on to mine… I'll hold on to yours'. He replied: 'Love You Brother'. 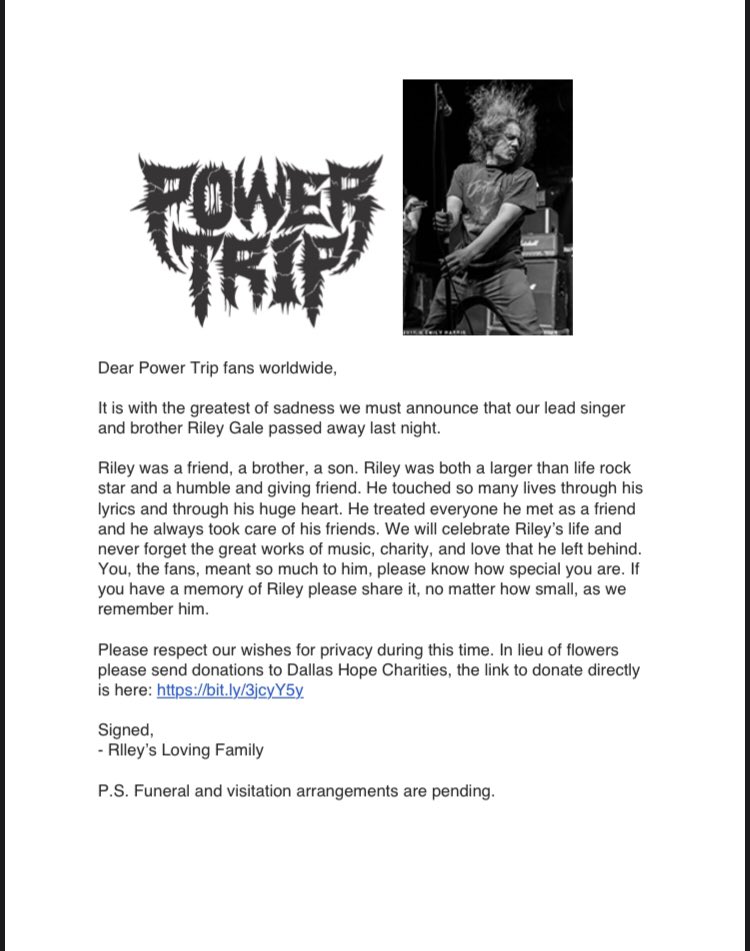